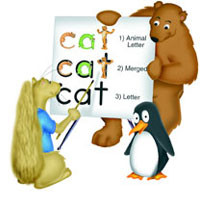 Letters are symbols and are very abstract for young children. The more abstract learning is, the less the students understand and remember. Zoo-phonics uses Animals in the shapes of lowercase letters before teaching the actual letters. Sequentially, the child learns first the Animal Shapes, then the Merged Animal-Letters and finally, when developmentally ready, the letters themselves.

Learning the sounds of the alphabet is essential for beginning readers. Zoo-phonics teaches the sounds of the letters through the animal names (“a” as in alligator, etc.). Research shows us that, letter names initially provide no link to the letter sounds. Expecting children to learn the letter names at the same time as letter sounds may only be confusing because children hear two distinctly different sounds.

Research shows that when the body moves, the brain remembers. The Zoo-phonics Body Signals allow children to put their natural “wiggles” to good use and act as a cue for memory. We know statistically that anytime we physically perform, memory is enhanced.

The alphabet is one unit with 26 parts which are all necessary for reading and spelling mastery. Why take 26 weeks to teach something that can be taught in a few weeks? Emergent learners can use the whole alphabet immediately because the Zoo-phonics Animals and Signals make it so concrete and playful.

It is much easier for a child to remember the sounds of a word with two and three letters, than to memorise the configuration of larger words. Most long vowels are found in larger words because they require other vowels to create the long sound.

Phonemic patterns (at, bat, fat, sat, etc.) are taught first, rather than random word lists (of, it, then, was, etc.)

Children are “naturals” at locating patterns. Patterns help them make sense of their world. You wouldn’t teach the times tables by mixing up the multiplication factors. Why, then, do we teach reading and spelling so randomly? Zoo-phonics teaches children through repetitive patterns, to make them aware of the patterns in speech and text.