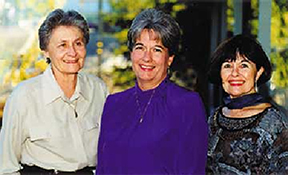 It was the beginning of the 1983 school term at Jamestown Elementary School, in Jamestown, CA. Gigi Bradshaw had a class full of 3rd, 4th, and 5th grade special needs children. She soon realized that she needed a different approach to teach them to read, spell, and write. Of her 12 students, few had a strong alphabetic foundation. Even fewer had a handle on the needed phonics concepts (graphemes and their multiple phonemes) that are used constantly in reading, writing, and spelling. She thought about it, prayed about it – and the “Essences” of Zoo-phonics was born!

It was during these first months of Gigi’s amazing literacy creation that her younger sister Char Wrighton, also a teacher of special needs students, began to utilize Gigi’s ideas and materials with her students – also with success. Although the materials were teacher-made at the time (we called it “La Gigi”), they were powerful!

Not only did the two sisters see huge and fast growth in their students, but other teachers and administrators began to take notice and wanted to use the curriculum and methodology too! It was at this point that Gigi and Char realized that this new literacy program needed to be shared with other children and teachers.

The two sisters invited artist and dear friend, Irene Clark to draw the illustrations for the Animal Letters and their educational products. Through her wonderful artistic talent and sweet nature, Irene gave the budding literacy program a child-friendly, playful, and professional look. It was at this time that the three ladies created many new materials: readers, music, games, posters, rubber stamps, etc. Zoo-phonics was born!

Gigi knew that for the shapes and sounds of abstract letters (symbols) to be easily memorized and utilized, something familiar had to bring the two together, to connect – so Animals were drawn in the shapes of the lowercase letters! It was the perfect visual mnemonic! The Alliterative Animal Names acted as oral and auditory mnemonics to teach the sounds of the letters (allie alligator, bubba bear, catina cat, etc.) And, as a kinesthetic mnemonic, children needed to MOVE with each Animal Letter, doing an animal-related gesture, called a Body Signal. This movement acted as the cement that “glued” the letter sounds to the letter shapes!

Gigi and Char were convinced that for children to remember academic information, they needed to “live” it. To experience it. To play with it. They had to feel it. And, children needed to move while they are learning. The curriculum had to be playful, social, concrete and it had to be physical. So, everything they created has met these criteria.

Irene was fluent in Spanish, so she spearheaded the Spanish version by creating the Animal Letters to match the Spanish speech sounds and did all the artwork and translations for the various instructional materials.

In the earliest stage of Zoo-phonics’ development, the three partners chose the motto, “Teaching the World to Read!” which was prescient because today Zoo-phonics is used in private and public schools and homes all over the U.S.A. and many countries in the world: Japan, South Korea, Singapore, many countries in Africa, the Dominican Republic, Spain, the Mid-East, India, Australia, Canada, etc. Arabic and Danish versions of the Animal Alphabet have also been created.

Zoo-phonics is indeed teaching the world to read, spell and write – one amazing child at a time!